In the wild west wagons would circle to provide protection from attackers.  If there is one thing that’s been very obvious is that big companies are circling the wagons amidst a recession to maintain their position.
Apple’s deletion of the game “Fortnite” from their app store is another example of this as they may be a suitor for TikTok.  Epic Games is filing suit but today, the small guy doesn’t come out ahead. In a silver lining to this story, weekly unemployment claims did come out with the first print less than 1 million since all of the insanity began.  It’s coming at a crossroads as the S&P tries for the second day in a row to reach a new all-time high.

Here’s the rest of the story: Thinking Outside the Box

Surely you’ve heard the phrase “think outside the box”; perhaps you’ve even said it yourself a time or two.  After all, it’s one of the most well-worn phrases not just in the business world but throughout the realm of real life.

Speaking generally, it means to think differently, unconventionally or from a fresh, different perspective.  The saying is an attempt to inspire (and accept) free, creative thinking.  While we rely heavily on computers, algorithms and neural networks for so much, those very tools would only be a figment of our imagination had there been no “outside-the-box” thinking.

The origin of “thinking outside the box”, according to many, traces back to the 1960s and the use of the “9 dots” puzzle, which was originally published in 1914 in a book called the Cyclopedia of Puzzles by Sam Lloyd.  The puzzle consisted of the following diagram and the instructions: Link all 9 dots using four straight lines or fewer, without lifting the pen and without tracing the same line more than once. 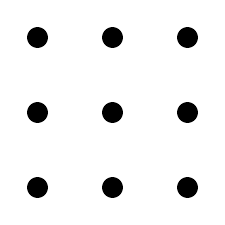 Go ahead and print that out — probably a few times — and give it a try.  We’ll wait right here for you.  What you’ll eventually find (one common solution is found below) is that you’re going to have to think “outside the box” to come up with a solution.

Even though there’s no instruction to stay within the box, most minds immediately tend to build a box, which instantly puts a constraint in place.  Thinking outside the box, meanwhile, removes as many constraints as possible — leading to the most original and innovative solutions.

Thinking outside the box is an incredibly powerful and useful tool; however, it can be a bit scary.  After all, it tends to be a bit safer to err on the side of conventional wisdom.  The reality, however, is that outside-the-box thinking is a powerful key that can open countless doors:

If you tend to struggle with outside-the-box thinking, the next time you’re faced with a problem, approach it from a different perspective.  There’s more than one way from point A to point B.  Think wide, think differently, or maybe, don’t think at all. 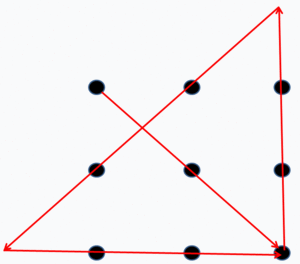 Both Kenny and I are storytellers, Kenny admittedly, much better!  This story is about Kenny’s son, and told by Kenny.

There is an old saying.  Beauty is in the eye of the beholder.  The saying teaches us so much about fun, talent and success.  Allow me to explain.

My son is a goofball.  He takes pride in being the weird one.  He isn’t too shy about showing a new dance move or singing a song that he has been working on.  He doesn’t seem to feel the need to impress others or worry what other people think.  As a result, he seems to have a lot of friends.

Lately, he has been singing a parody of a hit 80s song.  The song is called Take On Me by Aha and the parody is called Mine Diamonds.  If you recognize the song you’ll know that it’s not easy to sing.  There are a lot of high parts and most people can’t pull it off.  My son is among those and he happily lets his voice crack when  sings the parody.  He expressed to me that he would like to make a video of him singing the song.  I was a little bit reluctant at first but I eventually let him do it.

He sang the song outside so the neighbours could hear.  Truthfully, I was a little bit embarrassed and I hoped that the neighbours couldn’t hear and that it would be over soon.  When my son sang, he didn’t hold back.  He belted out the lyrics as loud as he could so any hopes that my son’s singing would go unnoticed were crushed.

When he was done, my next door neighbour complimented my son and my son smiled proudly.  My son was so proud of the video and was so happy to show it to others.  He showed it to his uncles and his grandparents.  He even asked me to upload the video on to Facebook and YouTube so he could share the video with others.  It was fascinating to see how happy a simple video made my son feel.

Happiness and success starts with how you define them.  Not anyone else.

Did this help you?  …it brought happiness to me… 🙂

The Purpose of Your Business [A Reminder]

Always keep the purpose of your business in mind.  Never forget why you’re doing this.  Surprisingly, many business owners forget this [or never accept it in the first place].  But here’s the secret:

At the end of the day, you’re in business to create financial freedom.

I hear business gurus espousing their flowery “feel good” advice about the purpose of starting a business, and I just roll my eyes.  Some will even say how they are only in business to “help people.”

So, do you focus on making money, or helping people?  It doesn’t have to be one or the other; it can be both.  You can make money through helping people.  As Zig Ziglar says; “You can have everything in life you want, if you will just help other people get what they want.”

Good morning. As much as Wall Street loves rumors, Washington DC is the major league.  The latest rumors are that Federal Reserve Chairman Jerome Powell might not be nominated for a second term to lead the Fed.  While his tenure has been little different than his prior two predecessors given the crises he’s had to deal with, some progressives don’t think the Fed chair has done enough on income inequality and other matters. That could lead the White House to find a more radical leader for the central bank, potentially even one willing to embrace the latest economic theories such

Here’s to a better YOU … and now … Today’s DarrenDaily Recap Sunday.  A collection of the weeks videos from Darren Hardy.  Enjoy! Naturally beautiful: Waves Crash Across the Rocky Shore. … I’ll watch awhile!. July 25, 2020 David Newman suggests YOU Grow Your Business with a Book! One of the fastest ways to grow your business (especially now) is with a book that positions you as an expert. Why? Because as opposed to webinars or events a book gives your prospect instant gratification.  They are able to download it and consume it the exact moment they see it. So

Letting Go Of Guilt “Guilt can stop us from taking healthy care of ourselves.” –Melody Beattie Guilt is like a rock.  It sits in the pit of our stomachs and can weigh down our every thought, behavior, and action.  It can distract us all throughout the day and keep us awake at night.  Our muscles work overtime just to carry it around, and yet we still hold onto it. It’s imperative that we stop feeling so guilty. That’s not to say that you shouldn’t feel guilt.  True guilt is a loving instrument from Spiritual Guidance used to convict, correct, and confirm your

Good morning. Technology companies need to constantly innovate.  That results in a high amount of money being spent on research and development, which in turn helps keep a company’s taxes lower than a company that makes the same product year-in, year-out. So it’s no surprise that regulators are always on the lookout for ways to try and get more taxes out of these massive firms that often have little to no earnings.  One proposal is being floated for a new generation of technology: a space tax.  Or, more specifically, a per-passenger tax on space flights like the ones just completed

Good morning. The rise of retail traders over the past year has likely saved a number of companies from bankruptcy, or helped bankrupt companies bounce back and exit bankruptcy faster.  That’s created a lot of interest in finding short squeeze stocks for big, fast profits.  It’s also driven traders into options to play the trend as well. One area can also be at play for big bucks: Corporate bond markets. Case in point, 2026 bonds for AMC Entertainment (AMC) traded as low as 5 cents on the dollar last year, but have no rallied back to par.  Buyers would have

Good morning. Investors sometime take a very binary approach to stocks.  They’re either all-in on a position, or they’re in cash or a different trade.  Rather than buy all at once, however, astute traders know when to average in.  As long as a company’s prospects don’t fundamentally change, this move allows investors to still have the option of cash, with the ability to buy more shares of a company when the market declines. So while Goldman Sachs (GS) recently warned clients not to buy Monday’s drop, retail investors saw a dip to buy instead.  With stocks hitting resistance at their

Good morning. The stock market was in freefall Monday, much like a mini-version of its March 2020 decline.  Is this the next big sell-off?  Probably not.  Monday’s fears, based on rising mask mandate re-impositions and a few select lockdown threats around the world, are likely being overblown. In the meantime, the bigger market concern is whether or not the current economic growth is sustainable.  The facts are that it will likely slow.  Not the best news, but not the worst news either.  And inflation expectations continue to rise.  But with a lumber market shouting “timber” as it comes back down