The market has been gearing up for some form of stimulus bill to be passed this week.  It’s been patient and resilient to any negative news.  With the jobs numbers hitting, it’s likely that bulls will need another catalyst to keep pushing valuations.
That, of course, is likely a stimulus bill. Republicans in the Senate are trying to force stonewalling Democrats to come to the table by tomorrow on a bill.  The tactic being used is a drop-dead date of today.  If a bill isn’t passed, it may be more than the bill that drops dead today.

Gold’s Hot Streak Has Legs to Continue to $3,500 (Or Higher)
Historically low interest rates may be the main driver behind the ascent, but these analysts point to a number of other reasons to suggest a longer run up.
The Dollar’s Ongoing Fall From Grace Will Soon Catapult Precious Metals to Even Greater Heights
Alt-Market.com’s surveys the current economic landscape and makes an impassioned argument for all Americans to own gold and silver now.
Gold Breaks $2,000 — And Its Outlook Remains “Wildly Bullish”
Gold and silver have been on a remarkable run as of late, but this new policy shift from the Fed could send them to greater heights.  “Silver expected to outperform gold.” —Weizhan Tan

The lithium-ion battery, which is destined to power the bulk of the world’s road-going vehicle fleet by the middle of the century, has occasionally been referred to as the “successor to fossil fuel” or even the “next gasoline.”

Though that may be metaphorically true, the lithium-ion battery itself actually shares a common root with fossil fuel and the fossil fuel industry.  In fact, the technology owes its very existence to one of the biggest oil companies in the world: Exxon.  It was Stanley Whittingham, a young British chemist working at Exxon in the early 1970s, who first proposed the lithium-ion battery.

His early design was destined for failure for a multitude of reasons, not the least of which was the cost of one of the essential materials, titanium disulﬁde, which was selling for about $1,000 a kilogram at the time.

The battery itself consists of many layers and components, but by far the most important of them all, in terms of mass and cost production, is the cathode. 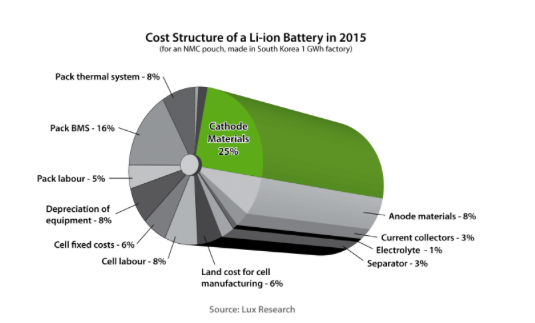 It is the development of and improvements to this structure that largely guide the performance of lithium-ion batteries, not just in terms of energy storage and longevity, but in the metric that’s most important both to the consumer and the producer: the cost.

Have a stiff neck?

Not complaining, but me too.

This past month I was unfortunate enough to:

You would think I was in a fight … AND LOST!

NO!  Nothing so serious, just a misplaced-step.

Good morning. Hedge funds have been selling their tech stocks for 9 of the past 10 sessions, based on brokerage data.  What’s more, these funds have been selling more than they own, essentially going short.  That’s a huge reason for the weakness in tech in the past few weeks, even as the overall markets remain near all-time highs. The last time funds were this short was back in late December, right before a surge in some smaller-cap tech names in January and February.  Based on this data, traders may want to look at some call options on the tech space

Good morning. Most sectors of the economy have been on fire this year.  But, there’s one area that’s steeply in a bear market.  It’s the media, more specifically the news media.  Cable news outlets have reported viewer drops as much as 50 percent.  And the New York Times Company (NYT) reported a sharp slowdown in growth. It’s no surprise that the news media benefited in the past few years from the public’s interest in all things Donald Trump.  Now, with Trump out of the White House and the media avoiding stories about him, it’s no surprise that viewers are going

Good morning. It’s been a great earnings season.  But companies like Amazon (AMZN) are now in correction territory, down 10 percent, since reporting record blowout numbers.  Other big tech names are in the same spot.  And smaller tech plays?  They’re likely already in a bear market. It’s a combination of factors at work.  The first is rising inflation numbers. The second is the prospect of higher interest rates to curb inflation.  And finally there’s the fact that companies are coming off of earnings that look great compared to a year ago at the start of the pandemic.  All these factors

Good morning. Online auction site eBay (EBAY) became huge in the 1990s thanks to the demand for Beanie Babies.  As the central site for that fad, the company was able to expand and survive the internet bubble. Now, the company is looking to enable cryptocurrency payments, to better serve its customers.  It’s also looking to break into the NFT, or non-fungible token market.  NFTs are digital assets like a picture or song.  While they can be copied, blockchain data provides the owner of the NFT with the assurance that they are, in fact, the original owner.  NFTs have been big

Good morning. The stock market had its steepest and shortest bear market last year, with a contraction of nearly 30 percent within the span of a month.  Now, a year into a recovery, the rally in stocks has started to slow. One reason? Growing policy uncertainty.  Stocks sold off Friday as a Fed President made the case for housing getting into bubble territory and a need for interest rate hikes next year.  Just like in the early 2020s, in the post-financial crisis rebound, fears of reduced monetary policy are usually good to create a pullback in markets. We’re still a

Here’s to a better YOU … and now … Today’s DarrenDaily Recap Sunday.  A collection of the weeks videos from Darren Hardy.  Enjoy! Naturally beautiful: Lots of things to do in beautiful, Newfoundland, Canada. …on the Rock! p.s. “It’s okay to modify the dream.” –Morgan H. Nichols May 02, 2020 You’re one of those people who are stuck in their ways. It’s hard for you to change your routine. We’ve all heard of the saying “You can’t teach an old dog new tricks.” In reality, you can’t change your mind without a commitment to change.  Most people are ‘checked out.’

Today! May 01, 2020 Gold Prices Going to “Pop” to $2,700 … Easily “Despite a weakened economy, stocks continue to rise on the back of monetary stimulus, which is bound to push gold prices even higher.” —Frank Holmes Good morning. “There’s no harm in holding cash, as long as your bank isn’t charging you to do so, which is probably coming down the road, so be prepared!” —Dennis Miller Now is a good time for investors to be scared — one reason is that there’s general agreement we’re in a recession … as economists rarely agree on anything. Just last