Today … we ask, “What could your life look like without struggle?”

We have been thinking, “What are some of the reasons that leaders fail to ever grow their income to 6 Figures annual or above?”

Every day we speak with leaders, who are failing to create the freedom that this profession promises to create.  Here are the reasons why you may be stuck right now in your business.

The first reason is that most network marketers’ prospecting is based on pure enthusiasm, not consistency.

We think, “I’ll post a few things on social media and the right people will message me eventually…”

But that just does not happen.

Or, we might do our prospecting in waves.  When we feel motivated we talk to a few people and when things are not going so well — we are stuck months without talking to anyone.

The simple way to know if your prospecting is inconsistent, (or notice if you’ve created enough relation-ships), is by prospecting to have at least 3 people to introduce to your products/business every day.

Are you finding yourself adapting what you say to a prospect or what you show them depending on who they are, what they want etcetera.  And are you then finding that you are going down an unpredictable road not knowing what will happen with this prospect?

The final reason leaders fail to create 6 Figures in their business is because they do not have a scalable system that they can pass onto the team they are creating.

First, you need to get consistent at prospecting, then you need a reliable recruiting process, but even if you have both … unless you have a system you can scale your team with…  You will plateau very fast…  Your business will stall…

You need to have a system, that in the case of 10,000 new team members joining your team tomorrow — you would be able to get them trained, give them all the tools, and enable them to start recruiting immediately.

Does your system do this right now?

Or does it require long-learning curves for new team members to learn skills for 3, 6 or even 12+ months when they first join …?

That not only means slow growth, but most often it means we never manage to get to 6 Figures!  Our business plateaus… and we are just one step from the worst … giving up on ourselves completely!

The other choice is the opposite of slow growth.  It’s leveraged and fast.

It would be sustainable, scalable, and a lot more proﬁtable.

But that needs a team duplication system that scales everything you do.

We have JUST THAT SYSTEM…  😉

Habit #3 — Perform the Task Itself

Commodities Have NEVER Been Cheaper

When I find Original Thinkers in the Markets, I read everything they write.  Philip Treick and Rob Mullin of Tocqueville Asset Management are two such Original Thinkers.  Like me, they have a tight mandate in the resource sector, but I’m always intrigued at their stock picks and market views.

In their last note to unitholders, they outlined just how cheap and under-owned resource stocks really are, compared to any other time in history.  (I knew they were cheap by looking at my own portfolio, but I didn’t know they were THIS cheap.)  With their permission, I am sending you a 2-part precis of their letter that lays all the facts out on the table.

For the third time in our resource focused careers (the others being 1999 and 2008) it feels like investors are willfully ignoring signs of resource sector recovery as inconvenient and temporary.  Our read is that it is a typical cyclical low which offers those willing to invest as value-focused contrarians an exceptional entry point.

We have argued for some time that natural resource equities are quite cheap, both on an absolute basis and relative to the overall market.

Jeremy Grantham and Lucas White of Grantham, Mayo Von Otterloo authored what appears to us to be a very thoroughly researched and fascinating White Paper entitled “An Investment Only a Mother Could Love: The Case for Natural Resource Equities.”  The findings of the analysis could be summarized as follows

The two charts immediately below graphically illustrate point #3, as it showed natural resource stocks had only been this cheap relative to the rest of the market once since 1926.  Further, the typical average annualized return of the sector relative to the rest of the market from levels like this have averaged 700bps a year for the following 5 years (2nd chart below), a huge number in an assumed low-return environment like we have today.

Since this chart was published 18 months ago the acceleration of natural resource cash flow and earnings have significantly outpaced those of the broader S&P 500.  Energy earnings and cash flow have roughly doubled since then, and materials have risen 35% and 18% versus gains of 8% and 1% for the broader market* while resource equities have broadly underperformed.

This leads us to believe that relative valuations have likely fallen “through the floor” to even lower lows. 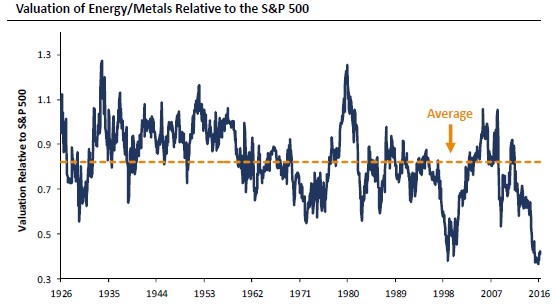 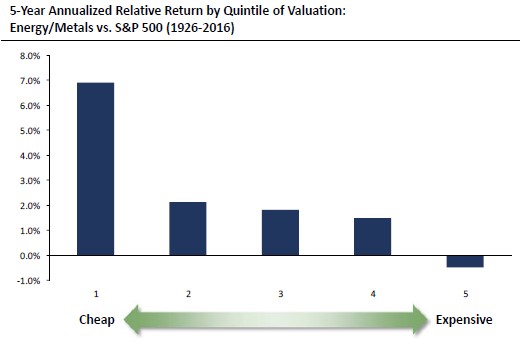 Investor Exposure to Resources, How Low Can You Go?

Despite the attractive characteristics mentioned in #1 and #2 above (and likely due to the perceived irrelevance of diversification and inflation protection in the current market environment), investor allocation to resource equities has continued to fall over the last several years.

The S&P 500’s exposure to energy and resources has fallen by 60% over the last decade and now sits right on the 25-year low.  The MSCI All Country World Index has shown a similar trend. 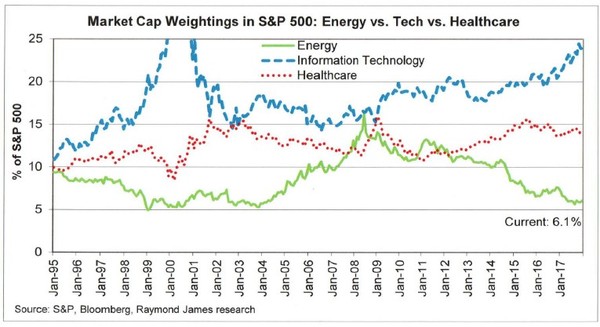 In March 2017 Bridgewater Associates published a note entitled “Contemplating a Secular Bottom in Real Assets vs. Financial Assets.”  In it, they noted that “a broad basket of commodities as well as gold were at 100-year lows versus financial assets.”  They also opined that the recent poor performance of the sector had led institutions to significantly reduce their exposure to it, illustrated by the chart below:

It is our understanding that what little allocation there is to natural resource assets from pensions/endowments is highly skewed towards energy infrastructure and credit, with very little allocated to liquid public equities in the sector.  This in many ways would explain the recent underperformance of commodity stocks, and would imply considerable incremental buying power should attitudes toward the sector reverse.

History May Not Repeat Itself, But Often Rhymes

The most recent cycle has been typical in many ways.  High commodity prices which peaked in 2011-2014 drove innovation, higher capital expenditures and resulting overcapacity.

Subsequent sector underperformance led to investor underweighting, which inevitably elicits the return of commentary that “it’s different this time” and will never recover.  By at least one measure which is charted below, this underperformance of commodities vs. stocks is reaching cyclical lows almost precisely matching ’99 and ’08.

Worth noting is that this chart was cited as support for the “favorite trade of 2018” by Jeff Gundlach of Double Line, a notable choice for one of the largest and most successful fixed income managers in the world. 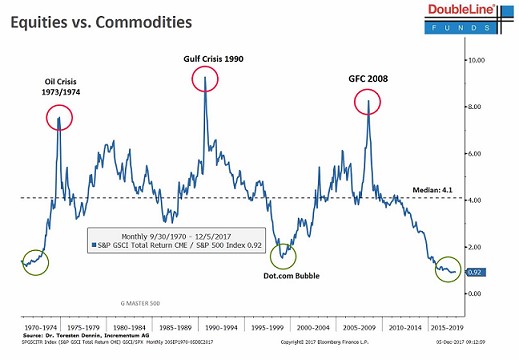 At each of these lows there were reasons put forth that posited a “new world” where demand would never recover as justification for permanently avoiding the sector.  In the early 2000’s the Economist declared “The End of Oil” with the coming technological wave of hydrogen fuel cells and bioethanol.  At the time the world consumed 70 million barrels per day.  It is now closer to 100 million.

[Don’t take my word for it… checkout the Oil and Gas Investments Bulletin for yourself.  I would highly recommend subscribing…]

Come from aways, do you?